Showing posts from August, 2012
Show all

The multiple views books that Christian publishing houses are putting out lately, are very helpful to the church. They show how disagreeing believers (and an unbeliever in this book) can amicably discuss their differences, while affirming what they keep in common. This new book from Zondervan, Four views on the Apostle Paul, edited by Michael Bird, includes a Reformed Baptist, a Catholic, a post-new-perspective theologian, and a Jewish theologian.

I came to this topic fairly naive, so it was good that the Baptist, Thomas Schreiner, wrote the opening essay, because I was familiar with this baseline. I even own his commentary on Romans. The responses from the other authors tantalized me to read their own essays.

The second essay by Luke Timothy Johnson, a Catholic, was also very good. I'm becoming a "both/and" guy as I age and mellow out, so I didn't see anything that Johnson's Catholic perspective threatened me. Johnson is also a "both/and" guy, and says…
Post a Comment
Read more

The book description of Autopsy of War suggests this successful dermatologist, John Parrish, will look at his four decade struggle with Post-Traumatic Stress Disorder, a topic I've grown more interested in as I've read ever more soldier memoirs. But after reading more than two-thirds of it, I returned it to the library. I think there is a line between unflinching and exhibitionist, and only the second leaves me feeling slimy after experiencing it. He starts with his parents' childhoods and the awful upbringing of his father, his born-again conversion to Jesus, and his adult life as a successful, hypocritical, mentally ill, narcissistic, philandering preacher. The author repeats his father's example, but adds a few chapters of his time in Vietnam, and finds success in dermatology instead of preaching. I do not deny his reality of living with the stress of flashbacks to the war, his nightmares, his fear of helicopters, his emotional disconnection, as a result of PTSD, bu…
Post a Comment
Read more

- August 09, 2012
The New York Times recently published an article highlighting a couple studies about human metabolism showing that only the first half of the mantra "eat less, exercise more" contributes to weight loss. It does not mean that exercise is not a good thing, but it's not a weight loss thing. Self-control is the key to weight loss. The Bible even speaks to this in Proverbs 23:2 and put a knife to your throat if you are given to gluttony. (NIV)

It's no secret that America has an obesity problem, and obesity is a symptom of gluttony. In the church's history, gluttony is viewed very severely, check out this definition from the Catholic Encyclopedia. Since America is mostly a church going nation, the American church, unsurprisingly, also has an obesity problem which indicates that it probably has a gluttony problem. Now some may claim that their genetics, and not the sin of gluttony, are the reason for their obesity. That could very well be, but a drastic reduction in cal…
Post a Comment
Read more

Crossway has started publishing a promising series, all subtitled "A Student's Guide." This one by Hunter Baker, Political Thought, was briefly intriguing, frustrating, and enticing at the same time. In a short 100 pages it tries to lay the philosophical ground work for the major themes of political thought, order, freedom/liberty, and justice. He quotes Aristotle, Socrates, Plato, Augustine, Aquinas, Locke, Mill, Rousseau, Hobbes, Rawls, Marx, Martin Luther, Martin Luther King, Jr. and the TV show Lost. All this book can do is whet an appetite, which it did for me. I was underlining, writing counter arguments in the thin margins, asking questions out loud, and then suddenly I finished the book.

In the last section of the book, he writes specifically to the Christian student. It felt awkward for me to see him mention "satanic rebellion", which means, unfortunately, this helpful little book may not make it into public libraries. His conservative beliefs were mos…
1 comment
Read more 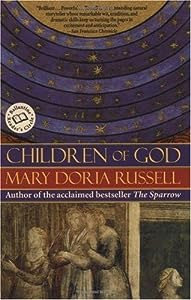 Cover via Amazon After tearing through Russell's first book, The Sparrow, I tore through it's sequel, Children of God as well. This book seems to be an even more intense meditation on the problem of evil. This may be why this book's pages did not turn as quickly as the first one, which is not to say it's a lesser book, it's just deeper.

Russell still does a good job at imagining the future. For example, everyone in the future in this book uses "ROM tablets" instead of iPads. The Pope in 2096 is a woman. In 2070, the Jesuits are allowed to advocate for birth control.

But the story picks up with recovery of the interstellar rape victim, Emilio Sandoz, and the ongoing question of why would God, if he exists, allow that to happen. Russell spends more time in the Hebrew scriptures in this book looking at all the angles to the problem of evil. Jeremiah comes up, the weeping prophet, who also wonders why God allows awful things to happen to his city and his peop…
Post a Comment
Read more
More posts