Showing posts from December, 2016
Show all

I have been taking The Jesus Driven Life slowly over the past month because Michael Hardin has many important things to say and I can only hold a few of them at a time in my cluttered mind. My 22 part ongoing series, Not everything Biblical is Christian, tries to do in part what Hardin is able to do more substantially. I started the series because I shared the issue Hardin raises,
The ‘standard’ Protestant view of the inerrancy or infallibility of Scripture is unacceptable. It is not simply a question of ‘historical errors’ (was Jesus crucified before or after the Passover meal) but the deeper theological ones (why is God as reflected in Jesus so substantively different than God is portrayed in many Old Testament texts) that have caused me to rethink the nature of the Bible. loc. 4375 Kindle Like Hardin, I was raised dispensational fundamentalist with an adoration of the Bible instead of the person who is the living, embodied, incarnate word of God. My blog series has tried to expose …
Post a Comment
Read more

two Biblical martyrs but only one a saint 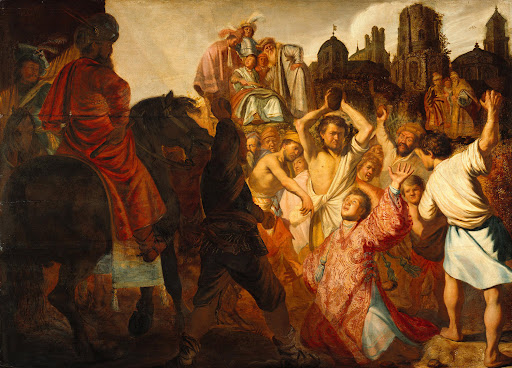 The day after Christmas is a day to remember the first Christian martyr, Stephen.

Acts 7:59 – 8:8 (NRSV) While they were stoning Stephen, he prayed, “Lord Jesus, receive my spirit.” Then he knelt down and cried out in a loud voice, “Lord, do not hold this sin against them.” When he had said this, he died. And Saul approved of their killing him.

As Stephen dies, he prays like Christ for his oppressors forgiveness. But Luke, the author of the Acts of the Apostles, perhaps intentionally, contrasts Stephen's response to his enemies with another prophet from Israel's history, Zechariah son of the priest Jehoiada.


2 Chronicles 24:17-22 (NRSV) Now after the death of Jehoiada the officials of Judah came and did obeisance to the king; then the king listened to them. They abandoned the house of the LORD, the God of their ancestors, and served the sacred poles and the idols. And wrath came upon Judah and Jerusalem for this guilt of theirs. Yet he sent prophets among them to bring them ba…
Post a Comment
Read more

eyes to see but cannot see

- December 22, 2016
It has really not been until this election that I understood Jesus' use of parables and his justification for them. The parables weed out those with confirmation bias. Let me explain. Jesus, and the prophets he quotes, likes to say about their critics they have eyes to see but cannot see and ears to hear but cannot hear. This clicked with me when I read the same idea expressed by Terry Pratchett and Stephen Baxter in a science fiction novel, "The Long Cosmos." They write this in the context of a extraterrestrial message "Come Join Us."
Some believed it must be what it most obviously looked like, some kind of SETI message from the sky...Others believed it couldn't be that precisely because that was the most obvious explanation." (p. 8) In the same way, a significant minority of the American voting public refused to apply Occam's razor of reasoning, the simplest explanation is the best one, and chose conspiratorial explanations over and over again. B…
Post a Comment
Read more

Is God Love or not? 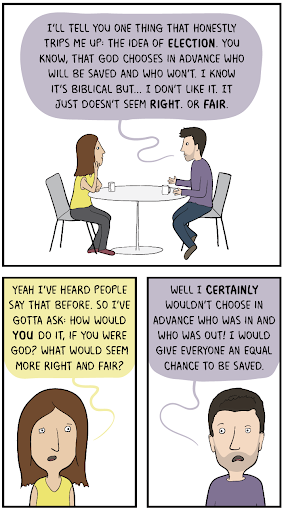 One of my conservative Christian friends on facebook shared this comic by Christian comic artist Adam4d. I used to take this line of reason, but now I disagree with it because the "bottom line" for Adam's theology is not what I find in Jesus.

For Adam's comic, the basic gospel message is about us. I think instead the basic good news from Jesus is God is a loving entity that seeks everyone who is lost to restore them to full relationship, like a widow and lost coin, a shepherd and a lost sheep, or a father and lost son. As Jesus' brother James writes, "Mercy triumphs over judgment." As his beloved disciple John writes, "God is love." I join many great theologians in the church's history who start from this ground floor instead of an anthropolgical statement. 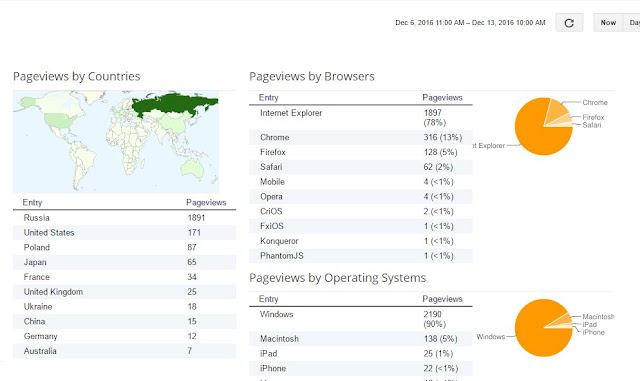 I've written about Trump with his name in the blog title twice. Suddenly, I have more interest in my blog posts from Russia than I ever have. Here is a picture of my stats, courtesy of Google's Blogger platform, over the past week.
I am a very little guppy in the big pond of blogs and social media and I have never had Russia more than the lightest green on the stats map.

Why do Russians care about my blog? The CIA says they are so invested in Trump's victory that they leaked the DNC's emails but have kept the hacked RNC's, presumably for leverage. They filled comment fields with Trump trolls, making false assertions (blatantly lying) and overwhelming social media conversation with dis-information. Senator John McCain has called this digital meddling a form of war.

I turned off comments on my blog ages ago because of spam and trolls. Russia has become America's troll in chief to support Trump.

- December 12, 2016
As a straight white man in the modern United States, I live a privileged life. I do not worry about sexual harassment. I do not worry about being killed for a traffic violation. I do not fear being killed for my sexual orientation. I live in a society that makes good assumptions about me because I am a white man. Yet, I want to empathize with my brothers and sisters of color. I want to empathize with my sisters. I want to empathize my LGBTQ neighbors. I listen to their stories. I read their tweets. I read their blogs. The voices of the minorities are the voices in many of the Psalms, most written while the Jewish people were in exile. The Psalms are the blues hymnbook of the Bible. But I have been blind, as a majority male to the power of these songs of lament. I do not feel the weight of oppression.

But because of Donald Trump, I begin to really know the soul of the Psalmists as I read through the lectionary. The Advent readings are chosen for the anticipation of a deliverer. Until o…
Post a Comment
Read more

If you ignore your Nazi history, you may repeat it.

People don't like it when I compare Donald Trump to Adolf Hitler. They think I am claiming he plans on committing genocide. I do not think that. However, his strident white nationalist supporters do compare him to Hitler, so I am agreement with them on at least one topic. Trump is a master at propaganda and uses disinformation techniques, something useful to any demagogue in the making. He also routinely scapegoats entire groups of people as the source of the problems his supporters endure. He also encourages the majority to feel like a persecuted minority. White christian men like being told that consideration of others and laws that facilitate economic equity for women and minorities are just "political correctness" or "anti-white racism" or "feminazism." Allowing for the full constitutional rights of gay and transgendered citizens is "social depravity engineering" which will turn white children into flaming queers. Diminishing white male…
Post a Comment
Read more

The God who compromises

Last year I wrote a number of posts about the plain fact that not everything Biblical is Christian. (You can use the 21st entry to find all the previous ones). One of the aspects of this rejection of biblicism is Jesus' overruling of Mosaic laws in favor of merciful, compassionate and even graceful responses; instead of Mosaic "eye for an eye" view of justice, a way of non-violent turning of the cheek, instead of execution of adulteresses caught in the act, a refocus on self-judgment, instead of his intended mission, an enlarged one. It's this latter example of compromise with compassion I've been thinking about today.

Matthew the tax collector, a despised profession among his fellow Jewish citizens living in occupied Palestine, who followed the merciful Jesus tells a curious anecdote.

Matthew 15:21-28 The Voice
Jesus left that place and withdrew to Tyre and Sidon. A Canaanite woman—a non-Jew—came to Him.  Canaanite Woman (wailing): Lord, Son of David, have mercy o…
Post a Comment
Read more
More posts